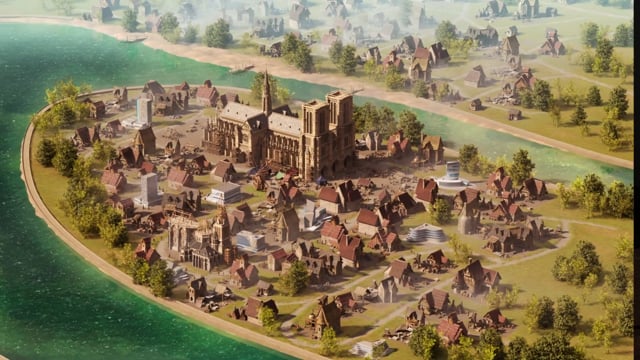 The aim behind this project was to “dethrone” the client’s best performing TVCs and set a new standard for their TV communication. The commercial had to mimic much of the same pacing, locations, ages and style of humor that they used in past top performing ads. With this TV Commercial, the goal was to attract new quality users to download and play the game. Therefore, the ad had to be very “clicky” overall to get picked up by the network’s algorithm, plus it had to be very attractive in the first seconds to hook the viewer from the very beginning and stand out from competitors.

Overview about the Game: Forge of Empires

Forge of Empires is a free-to-play, city-building strategy game in a historic setting that lets the player create his empire and guide it from the Stone Age throughout the centuries. The game combines aspects from city-building, turn- based-strategy and trading games, giving players the freedom to choose how to expand their city.
The goal of the game is to transform a prehistoric settlement into a modern city state which is unrivaled in trade, military and culture. With its emphasis on peaceful, non-competitive gameplay focused on building and growing idyllic cities.

The story focuses on the interaction between characters with an emphasis on showing emotions through exaggerated facial expressions.

Since the competition in the mobile games market is continuously rising, one of the main challenges in producing this type of video ad is to appeal to a casual audience with a modern style while avoiding being too generic. We had to aim for immediate emotional engagement and activation, so we have implemented memorable scenes and motifs representing the game’s vibrant colouring. We have also shown vivid, living cities and environments around the grand buildings that are getting built. The key driver for humor was achieved throughout character animation and interaction between main characters. While the narrative of gameplay elements was showcased in exciting and funny but easily understandable ways.